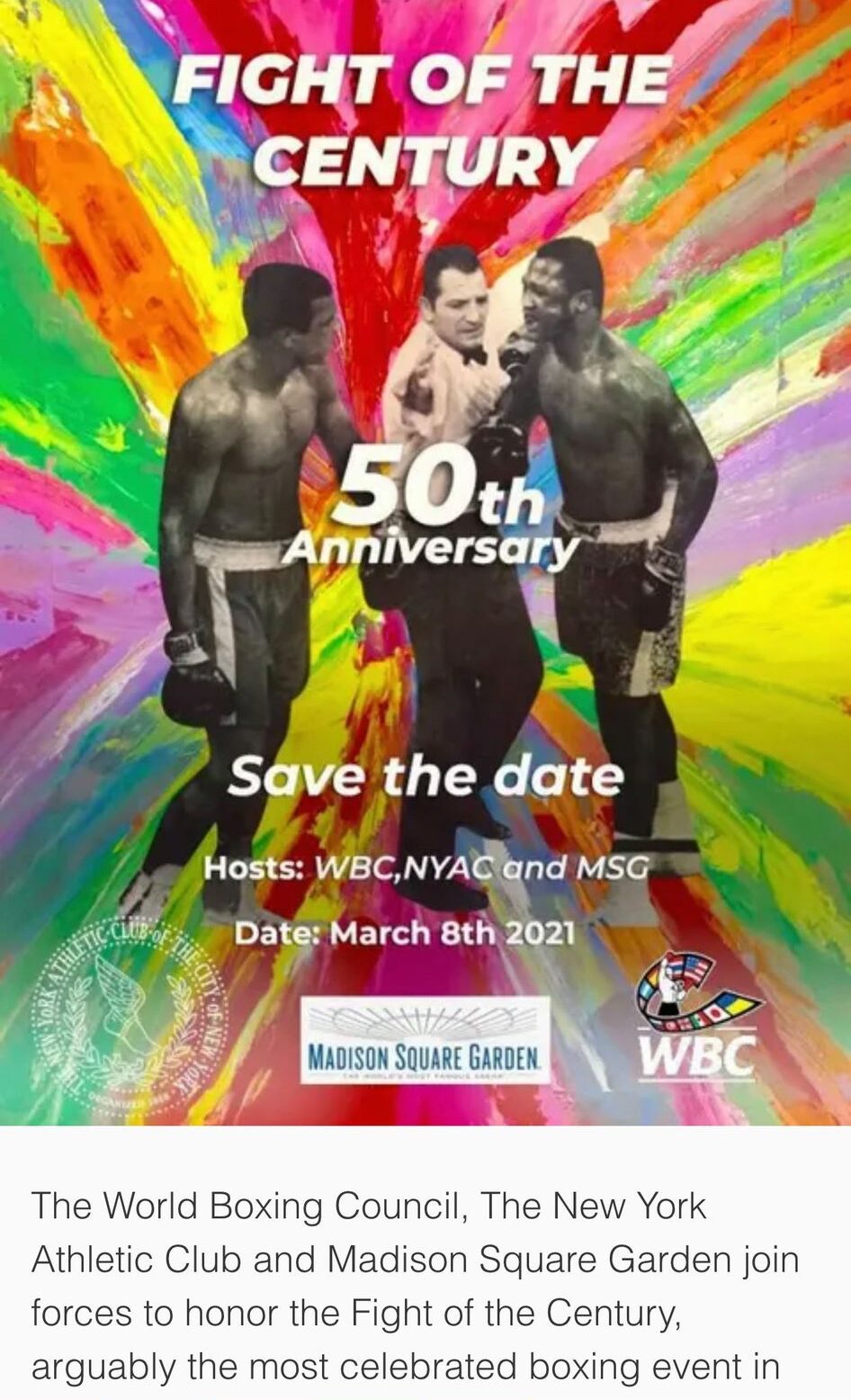 50TH ANNIVERSARY OF THE FIGHT OF THE CENTURY! MUHAMMAD ALI VS. JOE FRAZIER! @ MADISON SQUARE GARDEN IN NEW YORK, NY ON MARCH 8, 2021!

The night was memorable, fought by 2 undefeated heavyweights who would become legend in a boxing series that was labeled by many a the greatest ever. That was then…

Now, on March 8, 2021, the World Boxing Council, the New York Athletic Club, and Madison Square Garden unite to honor the 50th Anniversary of what was dubbed “The Fight of the Century”, the very first fight between former heavyweight champion Muhammad Ali and current champion Joe Frazier.

On March 8, 1971, former heavyweight champion Muhammad Ali was undefeated. However, he was dethroned due to his controversial anti-war stance and refusal to enter the draft. As a result, he was forbidden to fight in the U.S.. After a legal battle that reached all the way to the Supreme Court had exonerated him, he was ready to fight again.

In his way was the young new heavyweight champion Joe Frazier. A proud fighter from the fighting city of Philadelphia, he was determined to silence all those who refused to respect him as the undefeated champion because of Ali’s forced absence.

“No need to announce anyone, everybody’s here!” was the cry, as entertainers, athletes, and other famous and rich people paid up to $150 for ringside seats (equivalent to $947 in 2019) to attend the event. Legendary entertainer Frank Sinatra, unable to secure a seat, instead worked the event as a ringside photographer for Life magazine.

New York’s Madison Square Garden is still buzzing to this very day! It was and is arguably still the most-hyped event ever.

It definitely lived up to the hype.

Ali was seen by many Americans as a traitor and anti-American by those who favored the war during those turbulent times. They adopted Frazier as their hero, though only for the night. Others saw Ali as a hero and one of the bravest men ever for his stance. To them, Frazier was a sellout, deserving nothing but humiliating defeat at Ali’s hands. They saw Ali as the true champion.

The fight was a symbol of the conservative, pro-war right, who had Frazier as their representative vs. the anti-war, pro-liberal left. To many, it was far more than a sporting event or a simple boxing match. It was “Us” vs. “Them”.

Few knew that Ali and Frazier were actually friends. Frazier loaned Ali money for his support, for Ali was a fighter who was unable to fight anywhere in the U.S. while his case was being fought in the courts. In return for Frazier’s generosity, he promised to fight him if he won and after a few tuneup fights.

Ali started the fight in control, popping Frazier with jabs and combinations. At the end of Round 3, Frazier delivered his famous devastating left hook. It snapped Ali’s head back, turning the tide of the fight.

Ali fought gallantly, yet was unable to keep the pace he’d established in the 1st. In the 11th round. Frazier hit Ali with another blockbusting left hook to his jaw. Ali fell to one knee, his gloves touching the canvas. Referee Arthur Mercante Sr. saw that it was water from Frazier’s corner that caused the slip, then ruled it as “No knockdown!”.

The judges scored the fight through the 14th round clearly in Frazier’s favor. All he had to do was stay away from the tired Ali to avoid a KO, and he’d win the decision.

However, Frazier had other ideas: another left hook dropped Ali to the canvas in the corner. Though Ali immediately rose to his feet, it was the end Frazier went on to win the unanimous decision.

The two fought 2 more times. Ali captured the 2nd fight, and he also won the 3rd and final tie-breaking match. Dubbed the “Thrilla in Manila”, it is one of the most brutal fights ever, with Ali winning because Frazier refused to answer the bell for the 15th & final round. Ali admitted years later that he was going to quit, but Frazier beat him to it.

Attitudes changed about both fighters not long after the fight. The victorious Frazier was soon dropped as a hero of the Establishment. He’d served his purpose. In defeat, Ali became an even grater symbol of “the People”. He is still beloved today, seen by many as the Greatest fighter of All Times, or the G.O.A.T..

Though both fighters passed away many years after the fight, up until his death Frazier still harbored some bitterness towards Ali. He felt that he had helped Ali as a friend, both professionally and personally. In return, Ali publicly insulted him, labeling him an “Uncle Tom”. In promoting the last fight, Ali delivered a vicious poem that embarrassed Frazier and his family: “This fight will be a kill, a thrilla and a chilla, when I get that gorilla in Manila”.

Frazier had no choice in the matter when the right embraced him. He was not their active representative. Ironically, unlike Ali who resisted the draft, he was drafted into his role as the Establishment’s “man”.

Regardless, these 2 great fighter will be remembered in 20th century history for battling in “The Fight of The Century”.